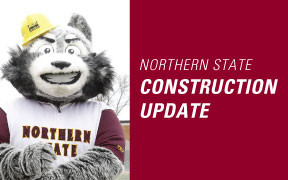 Chillers in Mewaldt-Jensen and the Tech Center are set to be replaced, beginning as soon as weather cools down. Below is a tentative project schedule:

•             Electrical demo of old MJ chiller in basement and electrical rough-ins for new MJ chiller. Demo electrical to rooftop units/exhaust fans/cooling tower that are being removed from roof.

•             Heating equipment and pumps should all be delivered by December/January.

•             Demo/install/start up new Tech Center chiller immediately upon arrival (early April). This will only take a couple of days. Set new MJ chiller at same time on new pad. TC chiller will be priority and not affected by heat/cool piping for MJ

•             After May 1 complete piping and replacing of heat only equipment after cooling is operational.