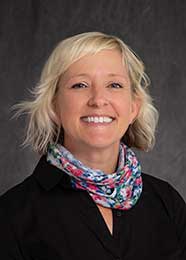 Dr. Susan Citrak joined the faculty at Northern in 2020. She grew up in the northern California Bay area and spent 26 years in San Francisco before moving to Aberdeen. She earned a bachelor of science degree in chemistry from Mills College in Oakland, Calif., and then went on to the University of California, Santa Cruz, for doctoral work. At Mills College, she conducted undergraduate research in physical organic chemistry studying unimolecular solvolysis reactions involving carbocationic intermediates in ionic liquid solvent systems. During her tenure at UCSC, she moved into inorganic materials chemistry and studied the exchange capabilities, structure, stability and anion properties of metal-organic coordination polymers, as well as ionothermal synthesis of metal-substituted aluminophosphate molecular sieves for potential use in catalysis.

Dr. Citrak has particular interest in and passion for environmental remediation, and believes inorganic materials can play a key role in this endeavor. Outside of the lab and the classroom, Dr. Citrak is a purple belt in Brazilian Jiu-Jitsu, a novice but excited gardener, fisherwoman, and video game enthusiast. She moved to Aberdeen with her wonderfully supportive husband, Joshua, and two energetic boys, Francis and Dashiell.