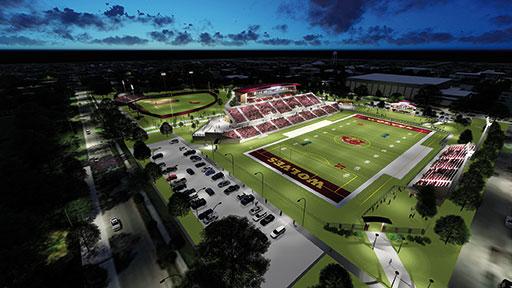 ABERDEEN, S.D. – The Educational Impact Campaign is gaining momentum, with pledges totaling more than $33 million so far for the collaborative effort between Northern State University and the South Dakota School for the Blind and Visually Impaired.

“We are extremely pleased with the progress of the Educational Impact Campaign,” said NSU President Dr. Tim Downs. “Since announcing the capital campaign at Northern Night, our committee has worked tirelessly to line up meetings with potential stakeholders.”

Downs said pledges for the campaign – which includes a new SDSBVI facility, the Athletic and Recreation Fields project and on-campus regional sports complex – have come from private individuals, the city of Aberdeen and organizations throughout the region.

“We continue to have great conversations with multiple organizations and groups,” Downs said. “More good news is on the horizon.”

Most recently, the city of Aberdeen pledged $185,000 from the annual 2019 promotion fund allocation. Along with that total, the city is expected to commit additional funding, for a total multi-year gift of $5 million – though that amount isn’t yet finalized and is expected to be confirmed during the city’s annual budget process.

While campaign officials are pleased with the progress, fundraising is ongoing.

“I’m very proud of the committee and what we’ve been able to accomplish,” said South Dakota Board of Regents member Jim Thares, co-chair of the Educational Impact Campaign Committee. “That being said, we still have a lot of work left. We want this campaign to exceed $45 million.”

Downs explained that fundraising $45 million is a process.

“It takes time and several meetings with potential stakeholders,” Downs said. “Once we explain what we’re doing as a university and how it affects future students and the community, people buy in.”

Meanwhile, work has begun on the Athletic and Recreation Fields east of NSU’s Jerde Hall. This project, which will be finished by fall, includes a soccer competition field, football practice field and pavilion.

The final design will be revealed this week for the new SDSBVI building. The facility will be constructed at the current site of Jerde, which is currently being demolished. After that point, construction will start on the new school, which has a projected completion date of fall 2019.

Moving forward, campaign officials are confident in the success of the projects.

“The bottom line is this is going to happen,” Thares said. “This fall, we will have a ribbon cutting for the new Athletic and Recreation Fields and a groundbreaking for the new South Dakota School for the Blind and Visually Impaired. Initial renderings for the on-campus regional sports complex will also be announced later this year.”

Thares also expressed his gratitude for all who have supported the campaign.

“On behalf of the campaign committee, I want to thank our stakeholders and the organizations who believe in the Educational Impact Campaign,” Thares said. “We also need to thank our city officials and the City Council members. Their support was critical.”