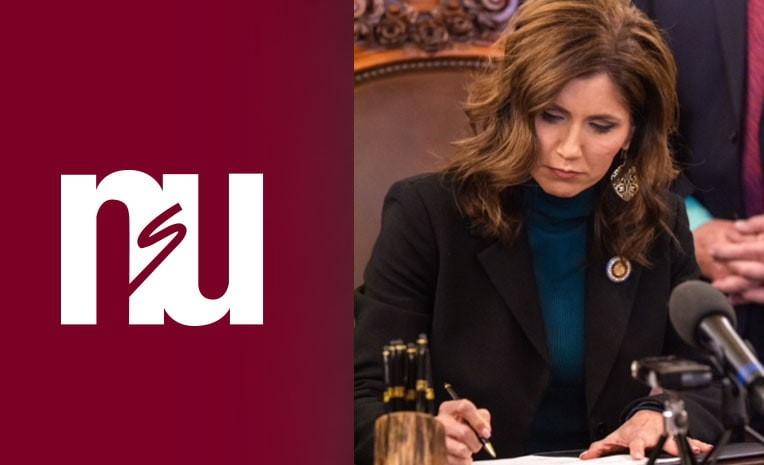 Gov. Kristi Noem has signed House Bill 1037, which authorizes the South Dakota Board of Regents to contract for the construction of the sports complex on the NSU campus.

The bill’s approval sets in motion the final project of the Educational Impact Campaign, a collaborative effort between Northern and the South Dakota School for the Blind and Visually Impaired.

“This feels like another game-changing moment, much like when we first kicked off the campaign a little over a year ago,” said NSU President Dr. Tim Downs. “While it’s exciting to have that final piece of the puzzle in place, the campaign now shifts to completing fundraising efforts – and a high-quality facility that will benefit our entire region.”

The Educational Impact Campaign, which first kicked off in fall 2017, involves three projects funded almost entirely by private donations. Besides the sports complex, that includes the Athletic and Recreation Fields project, which opened in fall 2018, and the new SDSBVI, currently under construction at the former NSU Jerde Hall site.

Support has been strong throughout the campaign, with numerous pledges from individual donors, area businesses and the city of Aberdeen. That support hasn’t gone unnoticed.

At HB1037’s hearing before the Legislature’s Joint Committee on Appropriations prior to approval in the House and Senate, Sen. Justin Cronin said the fact that the whole region is supporting this project is immense.

“You should be very proud of your alumni and of your community,” said Cronin, R-S.D.

Cronin pointed out that Northern came to the committee with a bill that’s fully funded, with a commitment to fund maintenance and repair. “How can a person sit here and say no?”

“Here’s a case in point in which the people have said this is how they want to spend their money,” said Greenfield, R-S.D. “I wholly support and endorse that, and I wish the folks at Northern well with this project, and the folks of the region well because a lot of people will be benefiting from this for years and years to come.”

The Legislature also approved bills last year related to Educational Impact Campaign projects. That included authorizing a land swap – relocating the SDSBVI to the former site of NSU’s Jerde Hall and allowing Northern to use the current SDSBVI site for the regional sports complex.

Also in 2018, former Gov. Dennis Daugaard approved a $2.5 million grant from the Governor's Office of Economic Development Future Fund for construction of the new SDSBVI.

“With Gov. Noem’s signature, this campaign has now had the support of two South Dakota governors and two legislative sessions, and we’re extremely grateful for that,” Downs said. “These projects will enhance the student experience for years to come and also be a tremendous boost for the entire region, and we’re thrilled that our state’s leadership recognizes their importance.”