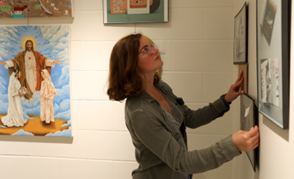 ABERDEEN, S.D. – Northern State University art students have a new space to showcase their work with the opening of Gallery X in the Johnson Fine Arts Center.

The gallery, located in JFAC Room 106, will primarily be used as a student gallery, and it will be a student-run space, said Northern Galleries Director Tim Rickett. Rickett said the space is all about experimentation, and Gallery X in particular is the students’ space in which to do whatever they want.

“It is a professional academic gallery space that will allow the students to put on their own shows throughout the year and serve as a space for critiques, documentation and even a space for larger installation-based work,” he said. “Having another space to show work is vital for artistic opportunities for our students, and we are beyond thrilled to begin our exhibitions in the space.”

Gallery X is now the second art exhibition space in the Johnson Fine Arts Center, along with the main JFAC Art Gallery. With this new addition, Northern now has more galleries than any other South Dakota school, Rickett said. Campus art spaces also include the Student Center Gallery, the President’s Gallery in Spafford Hall, Lincoln Gallery and the Beulah Williams Library Gallery.

Cloos, Northern Galleries student assistant, said the new gallery provides students an opportunity to see their artwork outside the classroom. She will have two photographs on display in the Grand Opening Exhibition—it’ll be the first time she’ll see her work in a studio.

“That’s really cool,” she said. “I’m excited for people to come see it.”

Cloos, a junior from Big Stone City, is double majoring in business administration and graphic design. Part of the reason she chose Northern is because her sister, mom, grandma and aunt all attended as well. “It’s a family thing,” she explained.

When she toured campus, the community feel at NSU also influenced her decision. “It just felt like home.”

For more information on Gallery X and studying the arts at Northern, contact the NSU School of Fine Arts at 605-626-2497.