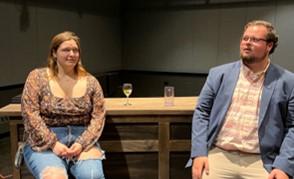 "First Date," written by Austin Winsberg with music and lyrics by Alan Zachary and Michael Weiner, follows Aaron and Casey on their first blind date at a trendy New York restaurant. In this musical comedy, she quickly assesses him as overdressed and tense while he is immediately intimidated by her artsy and provocative exterior. But once they start singing about their hilarious past adventures in dating, they begin questioning if their first impressions are worth a second glance. With songs as touching as they are funny, “First Date” promises a lot of treats on its menu.

Director Kane Anderson is excited for this show’s relatability. “Who doesn’t know the exhilarating awkwardness of attempting to make a love connection? Add a singing waiter, other patrons morphing into imagined disapproving relatives, and questionable friends coaching from the sidelines, the show takes us through a night of risks and rewards toward maybe finding true love.” Anderson adds, “Our cast really showcases some of the best young talent at Northern.”

Among those is Senior English Education Major Cody Brouwer, from Dimock, S.D., who plays Aaron the BDV (Blind Date Virgin). He returns to the stage after appearing in last year’s “Dirty Rotten Scoundrels” and “Frankenstein in Love.” Brouwer sees the role as a big departure for him, saying, “Aaron is different from the characters I have played in the past. He has much more of an awkward charm to him that was not present in the others. It's been a lot of fun playing around with that new element as he searches for ‘the one.’”

Meghan Sheets, a sophomore double-major in Music and Theatre from Belle Plaine, Minn., plays serial-dater Casey in “First Date.” She fell in love with Casey because of the character’s defiant hopefulness amid a history of love gone awry. Sheets says, “This role really gets me out of my comfort zone. Casey is quite a bit feistier. And what excites me about this production is the new cast members joining us. I love to see all the new faces and they are awesome to work with. I definitely think that the audience will appreciate the humor of ‘First Date.’”

“First Date” is an upbeat musical about the downbeats of dating and includes some adult language. Please use discretion with bringing younger patrons.

All tickets to “First Date” are general admission and will be available at the door. Cost is $10 for adults and $5 for senior citizens and NSU faculty/staff. Students will be admitted for free. Payment will be cash or check only; debit or credit cards will not be accepted. There will be no advance or online ticket sales. For more information, contact the NSU School of Fine Arts at 605-626-2497.

Northern State University is a student-centered institution that provides an outstanding educational experience, preparing students through the liberal arts and professional education for their future endeavors. A regional university, Northern offers rigorous academics; diverse civic, social, and cultural opportunities; and a commitment to building an inclusive environment for all points of view. Northern also offers a broad-based athletics program, sponsoring 15 NCAA Division II intercollegiate varsity sports that compete in the Northern Sun Intercollegiate Athletic Conference (NSIC). The university strives to enrich the community through partnerships such as its Educational Impact Campaign, which opened a new South Dakota School for the Blind and Visually Impaired; new athletic and recreation fields; and an on-campus regional sports complex. With the $55 million campaign, NSU has been the recipient of more than $150 million in privately funded building projects and scholarships within a decade. To learn more, visit NSU Admissions.