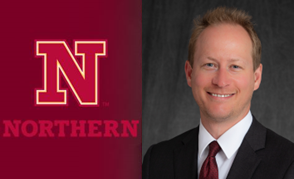 “Justin has been a valued member of our campus and community and will be missed,” said President Neal Schnoor. “He has led campus rebranding efforts; conveyed the vision behind the $55 million Educational Impact Campaign; been a key communicator with state and local officials, and led critical changes to enrollment management and the WolfPACT unleashed scholarship.”

Fraase has also been an engaged citizen of Aberdeen, serving on multiple community boards, including the Salvation Army Aberdeen, Aberdeen Area Chamber of Commerce Enhance Aberdeen Committee, and the Aberdeen Area Convention and Visitors Bureau.

“I cannot begin to express my sincere gratitude,” said Fraase. “From my executive leadership colleagues, to the hard-working and creative team within the Enrollment, Communications and Marketing division, I never imagined all we would achieve when I started on campus in 2017. It’s an exciting time to be at Northern, and Megan and I wish the absolute best for campus and the community.”

Fraase will transition to his new role in January 2023 at the University of Iowa, which is located in Iowa City and serves more than 30,000 students.