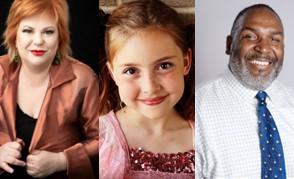 “Amahl and the Night Visitors” is a 50-minute chamber opera in one act that tells the story of the night of the Three Kings, following the star to Bethlehem, who stop for shelter at the home of Amahl, a poor shepherd boy who lives with his widowed mother.

Written in 1951 and commissioned by NBC television, “Amahl and the Night Visitors” was the first-ever televised opera, and first-ever opera specifically written for television in the U.S. With its timeless story, the production has been a staple of many opera companies across the country during the Christmas holiday season.

Playing the role of Amahl will be Eden Judyth Barkmeier, a fourth-grader at Aberdeen’s C.C. Lee Elementary School who is making her debut on Northern’s stage. Barkmeier’s public performances began at age 5, and since then, she has performed in Young People’s Theatre productions of “James and the Giant Peach” and “Snoopy!!! The Musical”; Central High School’s “The Music Man”; and Aberdeen Community Theatre’s “Matilda the Musical.”

Aberdeen third-grader Grace Mayer will be the understudy for the role of Amahl. This is Mayer’s first time on a public stage, though she has played Conseil in “Reader’s Theater 2000 Leagues Under the Sea” and Ophelia in “Hamlet.”

Bass baritone and guest artist Robert Cantrell will perform the role of Balthazar, one of the kings. Cantrell is one of the most sought-after bass-baritones in the Baltimore-Washington area, and has performed in cities throughout the United States, Italy, Austria, France and Japan. Cantrell’s career highlights include his Washington National Opera debut in Massenet’s “Le Cid” starring legendary tenor, Placido Domingo, on PBS; Donizetti’s “Lucrezia Borgia” opposite Renee Fleming; Strauss’ “Salome” with Deborah Voight; his Carnegie Hall debut in the Mozart “Requiem”; bass soloist on the Baltimore Choral Arts France Tour in the Mozart “Requiem”; his debut in Italy in Handel’s “Semele”; Puccini’s “Tosca” on Washington National Opera’s Japan Tour; and Gershwin’s “Porgy and Bess” in Austria.

NSU students Dylan Rausch and Tanner Pietz will portray the two other kings, Kaspar and Melchior. The chorus of Shepherds and Villagers will be performed by NSU music and theater students. The opera also features dancers from the Aberdeen Recreation and Cultural Center.

Conductor and music director is NSU music professor Michael Skyles. Pianists for the production are Aberdeen music teachers Kay Fischer and Melissa Nguyen. Sets and costumes are provided by Lyric Opera of the North, Duluth, Minn. Bultema and Skyles, who teach opera at Northern, are the producers of this production.

Tickets for this family-friendly production are general admission and available only at the door, with the box office open an hour and a half before curtain. Cost is $10 for adults, and $5 for senior citizens and Northern faculty/staff. Students will be admitted for free. For more information, contact the NSU School of Fine Arts at 605-626-2497.