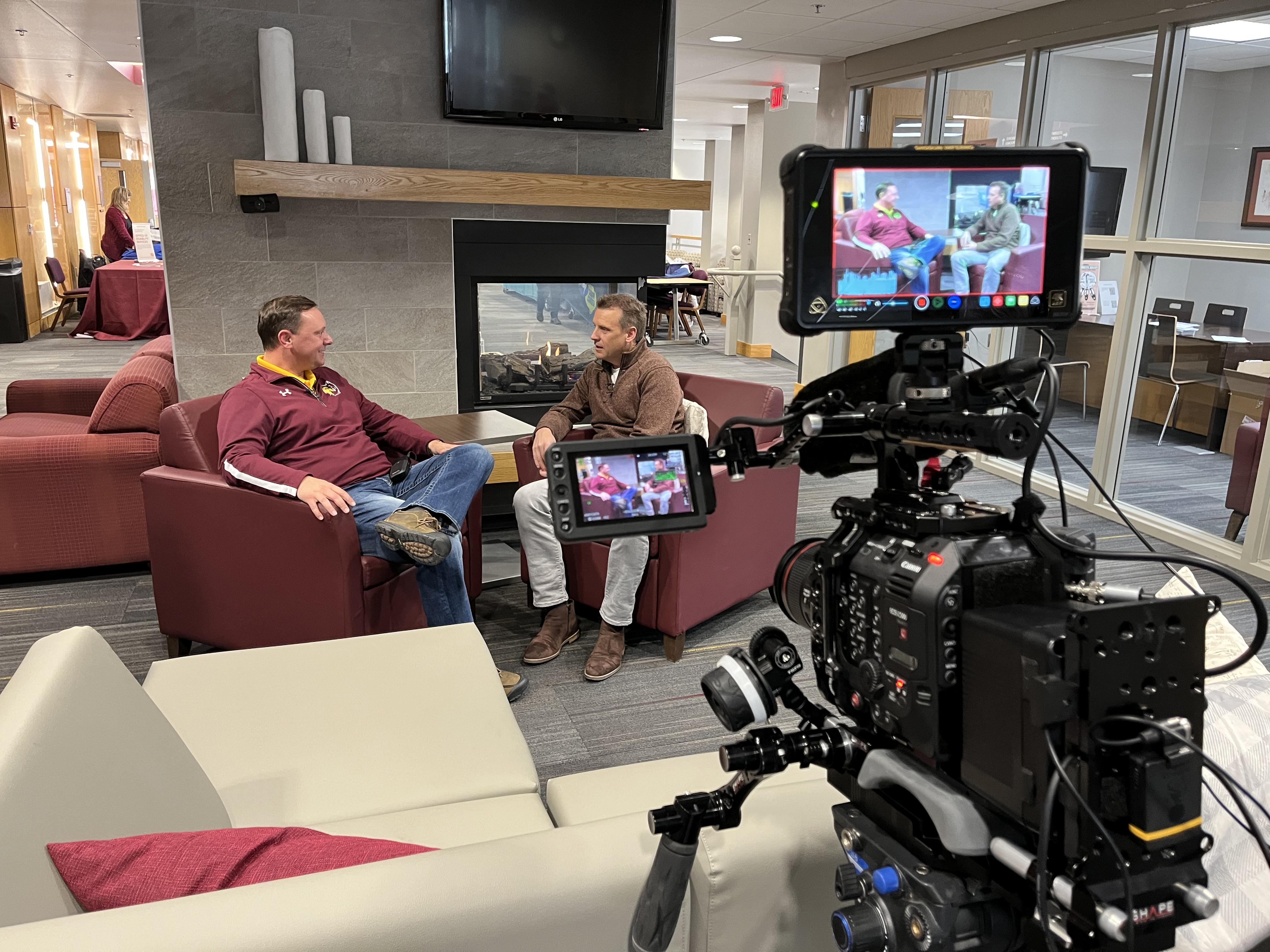 ABERDEEN, S.D. – Every year, Northern State University alumnus Tim Schut picks one word that will be his theme for the year—and last year, that word was courage.

The word took on a new meaning for Schut in June, when he was diagnosed with primary progressive apraxia of speech, or PPAOS. This neurodegenerative condition is so rare that there is a one-in-a-million chance of getting it, and only 300 people in the U.S. have it.

Schut is one of those 300 people living with PPAOS, a disease that is slowly taking away his ability to speak.

“Speech is my superpower,” said Schut, a 1999 NSU graduate. “It’s ironic that I’m going to lose the ability to speak. It’s very devastating.”

But Schut, known by his friends as “The Great Connector,” is now making connections to raise awareness about PPAOS. South Dakota Public Broadcasting is even making a documentary about him, filmed on the NSU campus, which is expected to air in late summer or early fall.

Schut hopes his story brings courage and inspiration to others. But while his rare diagnosis is one of the catalysts for the documentary, it isn’t the only aspect.

“My wife actually said that to me a few days ago: ‘Tim, you’re more than the disease,” he said.

It’s important to him to share his entire story.

That story includes his life at Northern, where Schut majored in marketing with a minor in management information systems. He was very involved on campus, including serving as Student Body President, being a Student Orientation Ambassador, working in the Admissions Office and teaching a class for students who had challenges adjusting to college.

Known as ‘The Great Connector’

Today, people know Schut by his nickname, “The Great Connector.”

That’s true for life in general, as well as professionally. Schut works in commercial real estate with NAI, and he’s the only person to graduate from Leadership South Dakota, Leadership Sioux Falls and Leadership Madison.

Schut has always been a great speaker. Right now, he said, “I have good speech days and bad speech days.”

Now, he uses his voice to create awareness about PPAOS. He spoke at Leadership South Dakota in Brookings, and has also spoken to speech pathology classes at the University of Northern Iowa and University of South Dakota.

Raising awareness is important to him because his own speech therapist had never even heard of his rare condition.

“My mission is to talk to a lot of classes so they can identify that disease, even though they might not run into it in their entire career,” he said.

Schut is also voice banking 3,155 standard sentences and 300 custom sentences, recording his own voice and uploading it into the cloud. When he needs it, he can download the recordings onto a tablet and use it to speak in his own voice.

He’s also writing two books: One is a story about his life for his immediate family; and the other is a business book about obtaining and maintaining relationships, titled, “Speechless.”

When Schut was diagnosed, his doctors didn’t have a lot of answers about his rare illness. While they are unsure exactly how it will progress, their prognosis is that Schut has about 10-15 years to live.

“I consider it a blessing that I have this lead time,” he said. “Car accident victims and heart attack victims don’t have that chance.”

His main goal, during that time: “That I walk all three of my daughters down the aisle.” He and his wife, Jen, have three daughters: Makayla, 15; Katelyn, 14; and Alyssa, 12.

For daily goals, Schut reads aloud to himself every day to keep his voice in shape. Also, “I try to give myself something to look forward to every day. I’m by nature a positive person.”

That’s what he recommends for others facing a similar situation.

It’s advice that he lives by. In fact, his word for 2022 is optimism—another fitting choice.